Flying close air support missions during the Viet Nam War, Brian’s aircraft was shot down near the Cambodian border. Unable to eject, he was severely burned in the crash and given little chance of survival. He spent one year in military hospitals and endured 15 reconstructive surgeries. After countless hours of physical therapy, Brian surprised the medical community and returned to flying jet aircraft.

Brian went on to become an airshow demonstration pilot, a TOPGUN instructor, and culminated his Air Force career by flying our nation’s premier spy plane, the SR-71. Brian was the pilot who provided President Reagan with detailed photos of Libyan terrorist camps in 1986 during the Libyan Crisis.

When Brian retired from the Air Force he pursued his writing and photography interests. He is well known today for his aviation books and his highly acclaimed nature photography. He was the first man to write a book about flying the SR-71, illustrated with his own photography, now the single most popular book worldwide on that plane.

Brian’s remarkable comeback story has inspired audiences world-wide as he is in high demand as a keynote speaker. Brian is a Spirit of Freedom Award winner, has appeared on the History Channel, and was recently inducted into the Air Force Legends Hall of Fame. Brian is the owner of Gallery One in California where his photography is on display.
Speaking At
SIM Foundation Keynote: Be the Rainbow 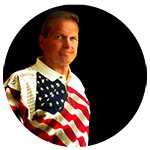