Prior to Jon starting Socorro Labs he worked for several large Fortune 100 companies including Anheuser-Busch and Cigna/Express-Scripts.

Most Recently, Jon was the CIO for Express Scripts the Health Services division of Cigna. Jon joined Express Scripts in February 2009. Through his time at Express Scripts and now Cigna, Jon has worked in all areas of technology including architecture, software engineering and infrastructure. Jon has led many transformational projects such as the building of the automated fulfillment pharmacies, modernizing the pharmacy applications, replacing and consolidating the datacenters and has helped lead the technology integration for several large M&A transactions. Jon has a strong background in development, engineering and innovation and holds over 34 patents for his technology innovation efforts.

Jon currently lives in St. Louis with his wife Elise. They have four wonderful children Matthew, Conor, Sean and Meg. As a family, they enjoy spending time traveling and cheering on their favorite sports teams at home and on the road.
Prior to Express Scripts, Jon led the Manufacturing Technology organization at Anheuser-Busch and was responsible for all of the technologies including software engineering, infrastructure and manufacturing automation for all domestic and international breweries. Prior to Anheuser-Busch, Jon worked for both Westinghouse and Accenture.
Speaking At
While the World Watched: COVID/Vaccine CIO Panel 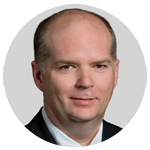