Exclusively represented by Leading Authorities speakers bureau, Higginbotham inspires audiences with her personal journey of breaking barriers into space and beyond. Taking groups aboard the International Space Station and sharing her lessons-learned along the way, she highlights the keys to succeeding in her missions – including seizing opportunities, being prepared, perseverance, and never giving up – and how these tactics can be applied to any endeavor. Sharing captivating insights from her 20-year distinguished career with NASA, she offers groups a fresh, unique perspective on stress management, teamwork, driving diversity, and social impact, and provides actionable strategies to work through and thrive in demanding, high-stakes environments.

A real-life rocket scientist, Higginbotham began her career at NASA in 1987 as an aerospace technologist at the Kennedy Space Center (KSC), Florida, where she worked her way through numerous promotions and actively participated in 53 space shuttle launches during her 9-year tenure. Selected as an astronaut candidate by NASA in 1996, she reported to the Johnson Space Center, with various technical duties including testing modules of the ISS for operability, compatibility, and functionality prior to launch. Higginbotham has logged more than 308 hours in space and retired in 2007 after 20 years with NASA, joining Marathon Oil to manage their corporate social responsibility office.

Widely recognized for her accomplishments, Higginbotham has been honored by President George W. Bush at the 81st White House Black History Month Celebration, featured in Alicia Keys’ Superwoman video, is the recipient of the National Space Medal, the Adler Planetarium Women in Space Award, and the NASA Exceptional Service Medal, and was named one of Savoy Magazine’s Top Influential Women in Corporate America and one of Essence Magazine’s Top 50 Women, among other accolades. 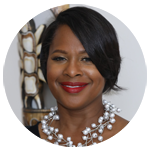